Take two photos, add a little paper folding, and give your photos a new dimension

Want to add a little interest to your scrapbook page? Make it jump off the page with a DoublePhoto

This neat little accordion fold trick lets you squeeze two pictures into one, and whoever is looking at your page will pick up the scrapbook and hold it up in the air, just to see the picture from both angles.

Start with the pictures you want to use. Let’s say you’re making a page about a child’s birthday - pictures that would work would be the child as an infant and at present. For best results pick pictures that are visibly different from one another; if they’re similar you won’t get as strong an effect. Use Cropper to get down to the interesting part of the picture – I used 18x24 as the aspect ratio since that’s the same as 3x4, and 2 3x4’s are the right shape to fit on a 4x6. (If you need to, verify the math while the DoublePhoto comes out of the printer. :-)) 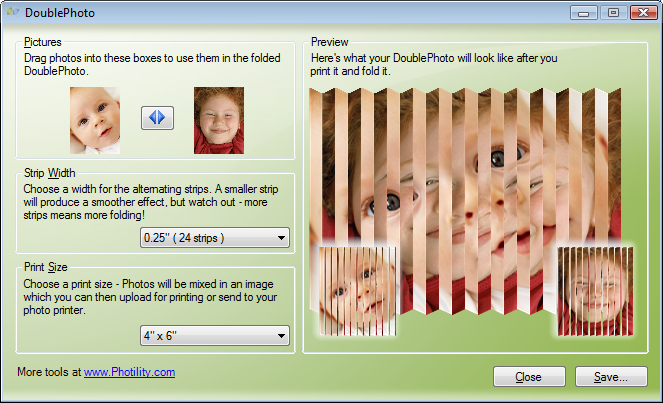 Now drag the two cropped images from Explorer into the placeholders in DoublePhoto. If you’re happy with what you see, click Save.

Next, send the file you generated to the printer. (I usually do this using Windows; just click the Print button from the preview window you see when you double-click the file.) If you’re using an inkjet printer you should let the ink dry a bit before continuing.

Now you’ll need a straightedge and something to scribe the folds in the image. I use a rotary cutting/scoring set from Fiskars, but a ruler and the dull side of a table knife (or similar scoring tool) would do just fine. Line up the ruler with each of the boundaries between the two photos, and apply some pressure while you pull the table knife along the line.

Carefully fold along the scored lines, in alternating directions, so that the photo ends up looking like an accordion.

Finally, attach the DoublePhoto to your scrapbook page, add your usual embellishments, and enjoy the reaction you get!

That’s it! Here’s an example of what it’ll look like when it’s all done.

DoublePhoto runs on Windows computers from Windows XP to Windows 10.

If you have a Mac, you can use software like Apple Bootcamp, Parallels Desktop, or Oracle VirtualBox to create a Windows environment, and DoublePhoto will run fine on your Mac.